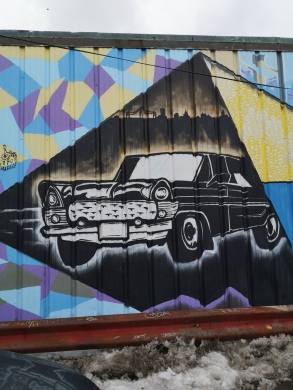 If you are visiting for the first time head over to  creative leap prompt. This will give you some history around this post and hopefully encourage you to join in. Basically I’m challanging myself to different creative prompts each month. This is my first response using the picture above.

It was a dream come true for Paul. As corny as that sounded.  Lookiing at the mural on the garage wall he felt he had honored the gift he had been given. The car looked pretty close to the one he remembered.

When his father had called to tell him he had an official looking letter come in the mail, Paul’s response was open it and toss if they are asking for money They weren’t.

The letter was from an estate lawyer telling Paul he was named in Mr. Williams will and to contact him as soon as possible.  Neither Paul or his father could think of a Mr Williams. Paul had questioned his father if the letter looked like a joke. It hadn’t.

The lawyer had explained that Mr Williams had left Paul his garage. It was run down as the last few years Mr Williams had been unable to work. But the property and equipment were paid off and operational. It wasn’t until Paul was told where the garage was and he thought about it that he realized who Mr Williams was.

Paul’s parents were going through a difficult time when he was around ten.  He wanted to be out of the house as much as possible. He would jump on his bike and take off.  He often started to run out of steam at a garage.  He would stop there to rest. He started checking out Mr Williams working on cars.  Mr Williams would stop, offer him a glass of water. Slowly Paul started talking to him about what was going on at home.  Paul remembered feeling safe at the garage. Mr Williams showed him how to change a spark plug, oil and tires.

Being a self obsessed ten year old Paul didn’t remember ever saying good-bye to Mr Williams.  His parents had sorted out their problems and the decision was to move closer to his grandparents.  That meant no more bike rides to the garage.  He had over the years totally forgetten how both the garage and Mr Williams had given him a safe place to express his self at a difficult time in his life.

The mural wasn’t much but he did feel Mr Williams would have liked it.  Paul took a breath and looked around at his garage. He had some work to do and that was okay.  He only hope he could also be a safe haven for anyone needed a rest stop and a place to talk.

You can always start now!

This site uses Akismet to reduce spam. Learn how your comment data is processed.